Cotswold Canal Trust got in touch via our website in regards to a bank on the Thames and Severn canal that needed stabilising. They had heard about us from one of our previous customers, who we helped with the Dursley Tree House project featured on Grand Designs in 2016.

One of our team visited the site at Ham Mill Lane in Stroud to discuss a solution to stabilise the failed canal bank with the volunteers from the trust. A screw piling solution to support the gabion retaining structure was developed with their Structural Engineer to install 60R screw piles both vertically and raked at 45 degrees using our 400H handheld anchor driver. This stabilisation would allow the Thames and Severn canal to be dredged. The work also formed a small part of a wider effort to eventually reopen the canal for public use.

As a result of our solution and the volunteer team's hard work, more material was prevented from falling into the canal, and they were able to support an adjoining neighbour’s garden from falling further down the hill.

The volunteers were inexperienced in screw piling so an engineer attended site to provide training on the safe use of the equipment. We assisted them with safe working methods to allow them to pile at 45 degrees on a steep slope.

“We had a good session of familiarisation training with one of your engineers on Wednesday . I would just like to say how pleasant and helpful he was, it was a pleasure to work with him.”

We enjoyed working with the Cotswold Canal Trust as the team are all volunteers, so they were keen to learn and get stuck in.

We are now assisting the trust with the design of a further 4m high gabion retaining wall which will be supported on screw piles. We are keen to see how this second project progresses and hope to continue to be involved with the wider project of re-opening the Thames and Severn Canal for public use.

If you have a project in mind and are considering using screw piles due to their many benefits, please don't hesitate to get in contact with us.

When configuring suitable screw piles for a project, our Engineers rely heavily on soil properties determined from geotechnical investigation. Often undertaking soil testing using the ABC Anchors soil test probe, or commissioning a full soil investigation (SI) report from a geotechnical engineering firm provides us with sufficient design information. On small projects, use of our soil test probe instead can significantly reduce the cost compared to an SI report and provide similar results for specification purposes.

There are occasions however when pile testing is necessary to confirm our pile specifications.

ABC Anchors was recently contacted by a Client looking to install screw piles for a residential project in close proximity to the Thames in London. From an initial review of the SI it was understood that the site was underlain by a thin layer of dense gravels, however the soil properties below this were not described in the report. Being London based, an area known for weak Clays, and with a site in such close proximity to a river; it was decided that the soil report could not be relied upon alone. As the project required over 50 piles to be installed with design safe working loads of 20 tonnes per pile, it was critical to test the pile under load to confirm that any settlement was within acceptable limits.

ABC Anchors installed an 89R test pile to an installation torque of 25kNm using our Autoguide 2500X torque head mounted on a 3 tonne excavator. Typically excavators between 5-10 tonnes are used to install piles of this size, however as the site access was restricted to a small alleyway only 1.5m wide, a 3 tonne excavator was the only option. It was a testament to our Engineering team’s ingenuity and the skill of our installers that installation torques of this magnitude were achieved using such a low powered machine. 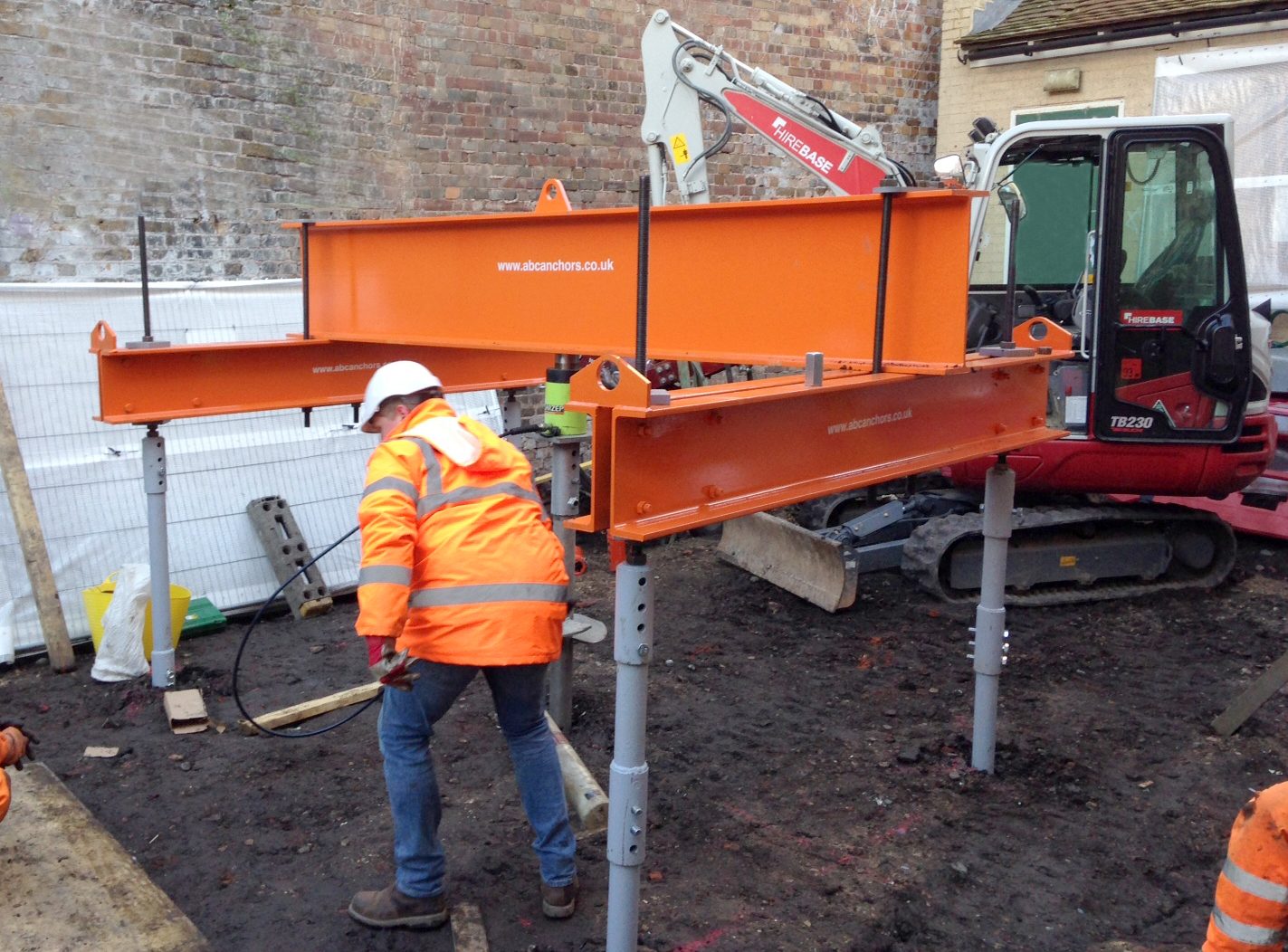 The pile was tested using our recently redesigned ABC Anchors testing equipment and experienced only 2mm of settlement when loaded to the pile’s ultimate load capacity of 62.5 tonnes. The Federation of Piling Specialists suggest that allowable settlement should be no more than 10mm under working loads.

The testing was a complete success and confirmed the suitability of our 89R rock tip pile for the project.

We can offer several packages for the supply and installation of our screw piles.

We can supply the piles and recommend an installer who will offer a full installation pile log with guarantee of work.

We can supply the piles and hire out the installation equipment for you to install.

Training courses at our premises or onsite (How to correctly use our equipment to install screw piles).

All our torque heads are manufactured by our sister company Autoguide Equipment and can be either purchased or hired from us. This can be on a daily or weekly basis.